Quick story for you, you dimwits.  The other day, there were two kids and an older gentleman sitting on the steps.  The kids were a boy about 12 and a girl about 8.  The older gentleman asks me if I’m part of the film crew.  I said, “Yes sir, I am.  That’s me causing all this trouble in your neighborhood.  Are these your kids?”

He replied, “No, these are my students.  I’m waiting here with them until their parents pick them up.”  I said “Cool,” and then I asked the kids, “So what’s your favorite subject in school?”  The boy answered without hesitation.  He says in a girlish, prepubescent voice, “I want to be a writer.”  I told him good answer.  Being a writer is a wonderful career choice.  Then the kid talked my ear off for the next 17 minutes.  He wouldn’t shut up.

The little girl was a little more bashful, so once Chatty Kathy finally shut his piehole, I asked her again.  “So what’s your favorite subject?”  She puts her head down, thinks about it for a second, and then softly says, “Being with my family.”

I told the little girl that was a good answer too, but too bad that wasn’t the question.   I said good thing they don’t teach Listening as a school subject, or you’d fail miserably.

Can you believe it?  Twelve years old, and this kid already knows he wants to be a writer.  I didn’t know that I wanted to be a writer until I was 26.  It was an accident, really.  I created a funny character on MySpace named Ralph, and the character started to take off.  I built up a pretty big following from people all over the world.  It was wild.  I had no idea what the hell was going on.

My brother read my stuff and he sends me an email one day.  He said my writing reminded him of this famous author.  My brother said my writing is similar to this book he recently read.  The book was called “The Catcher in the Rye.”  He knows I don’t read much, but he suggested I read it.   I borrowed the book from him, and gave it a read.  It’s been almost ten years now, and I still haven’t returned that book.  It’s the greatest book that I’ve ever read.  It was some compliment my brother gave me.  The Catcher in the Rye.

I’ve had several people tell me that my writing style reminds them of J.D. Salinger.  Those are big shoes to fill.  He’s one of the best authors of all time.  I don’t know that I’ll ever get there, but that’s the goal anyway.

Just like Chatty Kathy, one day I want to be a writer, too.    I think I have it in me, and that’s the first place being a writer begins – with you.  Not with some crappy ass teacher who barks all these rules at you, and tells you there’s only one way to write.  There’s a million ways to write a story.  My way just happens to be a little off.  Lots of mistakes.  Sloppy, wreckless, poetic, insightful, up, down, sideways, raw and rough, tender and sweet, wild and free.  Mix the ingredients all up, and hopefully one day it’ll make for an interesting book.  The kind of book that you borrow from a friend and never want to return.

Well, I just wanted to say thanks.  Saying thanks is important.  This blog is just for practice, but it’s nice that so many of you have stuck around, and that so many of you that leave come back to check in from time to time.  And for you regulars, it’s amazing to me that you read my madness on such a consistent basis when there’s a million other things you could be doing with your time.

This one is especially for you.  How’s about an autographed photo of me dressed up like a Roman soldier, wearing cowboy boots, camo shorts, old geezer blue blockers, doing a little fishing in a swimming pool, and sitting right next to the one, the only, the effervescent Whoopi Goldberg.  Many thanks. 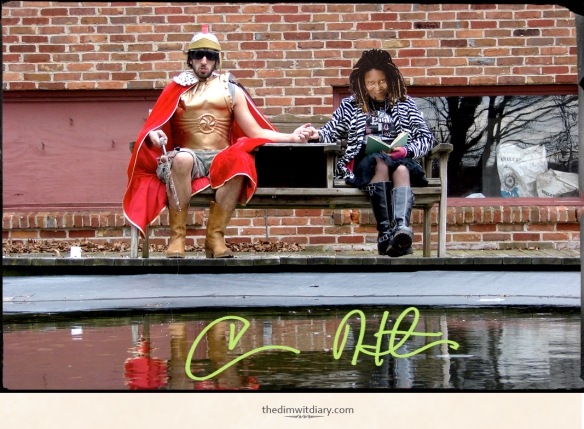 I woulda had Whoopi sign it too, but she says she was having a bad hair day.  She refused, but I think her cornrows look fabulous.   Just like you dimwits.  Fabulous.  Thanks again.